Undergraduate Lauren Leffer and I just published a paper in PLOS One entitled Social Grooming in Bats: Are Vampire Bats Exceptional? The answer, I think, is yes. Here’s the story behind the paper. 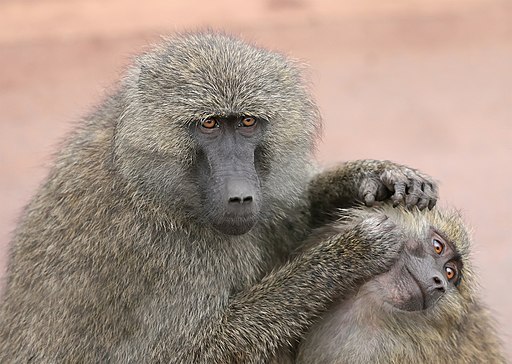 When you think of social grooming, you think of primates. Social grooming in primates has been viewed as a social glue that helps maintain social bonds, and as a social currency that can be exchanged for favors. In fact, I would wager that there are more data on social grooming in primates than almost any other mammalian cooperative behavior (outside humans). But many other animals groom each other too, including some bats. In 1986, Jerry Wilkinson published a great observational study on social grooming in vampire bats, and he showed that it correlated with both food sharing and differed between ages and sexes. My impression has always been that vampire bats are pretty unique among bats in their propensity for social grooming. But we know that at least some other group-living bats also groom each other, and some people have told me that, in captivity, other bat species groom each other maybe even just as much as the vampires. So how special are vampire bats? Are they really more like primates than other bats?

Doing a comparative study on social grooming across species is a bit tricky in the field, because other factors, like the number of ectoparasites, or the nature of the relationships between the individual bats, might predict grooming rates even more than the species differences. For example, vampire bats have lots of ectoparasites, and they also form long-term social bonds, and maybe that’s why they social groom each other more.

At the Bat Zone, run by the Organization for Bat Conservation (OBC), there are several species of group-living bats living in captivity. None of them have bat flies or other ectoparasites, and since all the bats are stuck in captivity, there are not species differences in proximity or association, like you would normally have in the wild. In other words, the environments are pretty similar for all the bats there. So, in my mind, it’s a great opportunity to compare social grooming rates.

Undergraduate student Lauren Leffer, with help from volunteers at OBC, sampled social grooming by watching a single random individual, and then going from cage to cage, species to species, and recording what the bats were doing. Social grooming was of course, pretty rare overall; but I was surprised to find that observers witnessed it in many of the captive bats, even in species, like Carollia perspicillata, where it has never, to my knowledge, been observed in the wild. But the rates were very low compared to the vampire bats. You can read the paper for more details on that.

To me, this all suggests that there’s a real species difference in social grooming, and it’s not just an artifact of some particular vampire bats being more familiar with each other than members of other species.

Here in Panama, graduate student Victoria Flores has been watching many videos of social interactions between roosting frog-eating bats (Trachops cirrhosus).  Like all bats, they spend some time grooming themselves. But Victoria has never seen Trachops grooming others either.

I also did a study where I put several completely unfamiliar vampire bats together for several weeks. At first, there was no social grooming, but gradually the bats began to groom each other. You could see bonds forming in real time; it was fascinating. I’m replicating that study in a couple of months here in Panama. We are in search of roosts and places to catch vampires. A couple of days ago, Thomas Sattler sent me these pictures of a (very) large roost of common vampire bats in a hollow tree in Panama.

That’s a lot of vampire bats!

Here at the Smithsonian Tropical Research Institute, I’m starting a project on the sensory ecology of vampires with Rachel Page and John Ratcliffe (starting in January 2016). I’m also applying for NSF fellowship money to work on social behavior, oxytocin, and oxytocin receptors with Alex Ophir. If successful, this work would start January 2017 at the latest, but the competition is quite stiff and seems unlikely. The sensory ecology work is guaranteed, and should be quite fun, because it will involve experiments with single subjects that one can watch in real time. In contrast, the social behavior experiments take much more time, the data require weeks to accumulate, and one has to analyze interactions between multiple subjects (social networks). We are currently planning and preparing for the arrival of our vampire bat colony, while waiting for our permits to be approved.

Finally, this short note paper also just came out, from my visit to Thailand.